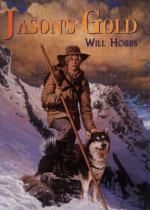 Will Hobbs
This set of Lesson Plans consists of approximately 133 pages of tests, essay questions, lessons, and other teaching materials.

2. What does Jason decide he must do about the Mounties?
(a) Develop a plan.
(b) Sneak by them.
(c) Make sure he has enough weight in his outfit.
(d) Bribe them.

3. Why does Jason all of a sudden understand the urgency to move forward?
(a) The Mounties stop him.
(b) The weather begins to change drastically.
(c) Old timers are telling him.
(d) People coming back are saying the gold is running out.

1. What makes the trip more pleasant for Jason?

2. How long does Jason stay at Lake Bennett?

3. What do the boys do to pass the time?

4. Who does Jason talk to a his brothers' business?

5. What does Jason think about when he looks at the night sky?

1. What do Jason and Charlie do when they leave the area of the cabin?

2. How does Jason's initial attempt to see Jamie go?

3. What arrives with May and what happens to the cabin where Jason and Charlie have been staying?

4. How does Jason's decision about paddling work out and what does he near at the end of Chapter 14?

5. What do Jason and Charlie do after he meets up with his brothers?

6. How does Jason finally get to see Jamie and what does she tell him?

7. What significant day is coming up in Chapter 22 and how is that time of year affecting the people in the area?

8. What happens when Jason is at the bear cave?

9. What does Jason worry about at the lake and what does he decide he has to have?

10. What does Charlie say to Jason which helps clear the air?