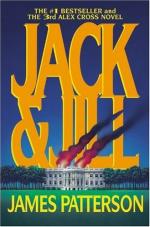 1. Who watches Cross and his son take a walk?

2. Where is the little girl's body left after she is murdered in Chapter 1?

3. What is Kevin Hawkins' legal job?

4. Who do Cross and his partner chase across a courtyard as they investigate the school killings?

5. Where is the little girl killed in Chapter 1?

1. Which law enforcement agency employs the major investigator in this novel? Is he well-liked by his supervisor?

2. What happens when investigators approach a man who is known as Chop-it-off-Charlie, and why does this seem to be an admission of guilt?

3. Why aren't the Truth School killings a priority for the law enforcement agency? What does this seem to say about the police department?

4. What does the main investigator in this book like about the school principal? How does she bridge the gap between rich and poor?

5. What role does the major detective in this novel play in the investigation of the Truth School killings, and what is unusual about his role?

6. How do Jack and Jill attack their first victim, and why is this attack important?

8. What clue is intentionally left behind at the first Jack and Jill murder scene, and what role does it seem to play in the case?

9. Is the first murder by the Truth School killer as calculated as the first Jack and Jill murder? Why or why not?

10. What are the code names for the President and first lady? Is this a coincidence? Why or why not?

Discuss the motive of the Truth School killer. What role did his personal background play in his decision to kill? What role, if any, did his medication play in the murders?

What is a foil? Who is the foil of Jack and Jill? Discuss the character who provides the role of foil in this novel and discuss how he/she fulfills the role.