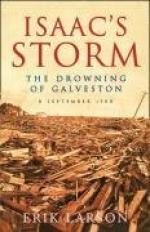 This quiz consists of 5 multiple choice and 5 short answer questions through Part I: The Law of Storms.

1. What bison hunter and showman does the author describe performing in the Wild West in Introduction: The Beach?
(a) Buffalo Bill Cody.
(b) Aristotle.
(c) Teddy Roosevelt.
(d) Henry Piddington.

2. Going back to the third century BC, who noted that "air" had substance, according to the author in Part I: The Law of Storms?
(a) The Greeks.
(b) The Byzantines.
(c) The Egyptians.
(d) The Romans.

4. What term refers to a wind that blows with the direction of travel?
(a) Tailwind.
(b) Pushwind.
(c) Headwind.
(d) Nonlinear dynamics.

1. Christopher Columbus was commissioned to lead a fleet on a voyage where in 1502?

2. The invention of the __________ was key to the development and effectiveness of the Weather Bureau allowing for the rapid transmission of weather forecasts from city to city.

3. What was the name of the captain who commanded the "Pensacola"?

4. Who proved that air had mass, according to the author in Part I: The Law of Storms?

5. Isaac Cline arrived in Washington, DC to study at the US Signal Corps on what date?