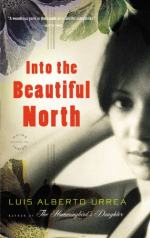 Into the Beautiful North Fun Activities

Write a poem about the summer in Nayeli's Mexican village. Include the references to the weather, coastal beaches, and wildlife.

Nayeli's village does not exist on a map. Create a map of the area based on the book's description, including the nearest town, and an approximation of the bottomlands.

Write a speech for Irma to give. Include what she means by declaring that it is time for a new kind of femininity.

Create a soundtrack of ten songs that go along with the story's plot. Include an explanation for why you chose each song. At least two songs should be from Mexican artists.

Create a new cover for the book. Change the color scheme, picture, and...

More summaries and resources for teaching or studying Into the Beautiful North.

Into the Beautiful North from BookRags. (c)2022 BookRags, Inc. All rights reserved.