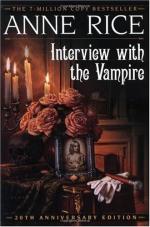 Anne Rice
This set of Lesson Plans consists of approximately 125 pages of tests, essay questions, lessons, and other teaching materials.

1. Louis meets a man outside the theater after having talked to Armand. What does the drunk man offer?
(a) To sleep with Louis
(b) To paint Louis
(c) To bring Claudia to Louis
(d) To feed Louis

3. What card game does Claudia enjoy playing during her time on the ship?
(a) Rummy
(b) Poker
(c) Solitaire
(d) Canasta

4. Why does Armand say Madeline and Claudia must leave Paris?
(a) So that Louis and Armand can begin learning from each other
(b) So that Louis can be truly free of her
(c) So that Claudia and Madeline can effectively bond
(d) Santiago and the others are suspicious of them

5. What does Armand say about the number of vampires who live together?
(a) That it includes slaves
(b) That it fluctuates
(c) That additional women are taken in as needed
(d) That the number is jealously guarded

1. Louis says he detects a specific scent once inside the small inn in rural Europe. What was that scent?

2. How many vampires feed on the young girl on stage during the theater performance?

3. What does Madeline say she wants to do to the doll shop?

4. The woman at the inn gives Louis a crucifix. Why?

5. Where does she get the cards she plays with?

More summaries and resources for teaching or studying Interview with the Vampire.

Interview with the Vampire from BookRags. (c)2022 BookRags, Inc. All rights reserved.