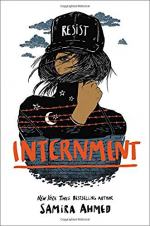 1. Why does Fred say the Director is afraid of Layla?
(a) She has turned the guards against him.
(b) She will mock him to the internees.
(c) She cannot be disappeared.
(d) She has brought attention to the camp.

2. Who has arrived at the camp the morning after Layla’s confrontation with the Director?
(a) Layla’s Nanni.
(b) Protestors and the media.
(c) David.
(d) International observers.

3. After Layla gets back to her trailer, what does Jake’s note tell Layla is going to happen?
(a) Beatings.
(b) Arrests.
(c) A lockdown.
(d) Opening the camp.

4. How does David address his previous conversation with Layla when he sees her again?
(a) He makes it up with flowers.
(b) He refuses to address what angered her.
(c) He apologizes profusely.
(d) He promises to change.

5. Where do the Director’s private security guards take Layla in the middle of the night?
(a) A room that smells like bleach.
(b) Outside the camp.
(c) Her trailer.
(d) The Director’s office.

1. Why does Jake say he is still going along with the Director’s plans?

2. What does Layla say is the advantage of the distance between herself and her parents?

3. What will fascism be wearing when it comes to America, according to the quote Ahmed cites?

4. What does the Director do when Layla refuses to beg for her life?

5. Why does Jake keep Layla from telling him her plans?

1. What changes when Dr. Han comes to examine Layla’s injuries in her cell?

2. What does Layla tell the crowd when she gets the bullhorn, and what does she say about America?

3. What does Samira Ahmed say makes her angry in the Author’s Note, and what does she say gives her hope?

4. What is the image Khadijah auntie recites to Layla, and what effect does it have?

5. What does Jake tell Layla about his compass rose tattoo?

6. How does David’s second visit come about, and what does it accomplish?

7. What does Layla have planned after she gets the article out of the camp to be published?

8. What does the Director weaponize in his second meeting with Layla in his office?

9. What is the outcome of the protest Layla and her friends stage during the Red Cross visit?

10. How does Layla’s second article get out of Mobius?