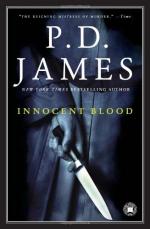 2. Why does Philippa go to see a social worker?

3. Who is Philippa's adoptive father?

Philippa's adoptive father is Maurice Palfrey. Maurice is a sociologist. Philippa often feels like a burden around Maurice as well as a social experiment due to Maurice's job as a sociologist.

4. While growing up, what is Philippa told about her biological parents?

More summaries and resources for teaching or studying Innocent Blood.