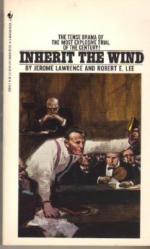 Jerome Lawrence
This set of Lesson Plans consists of approximately 111 pages of tests, essay questions, lessons, and other teaching materials.

1. According to Drummond, those who hold up the progression of society are what?
(a) Clock-stoppers.
(b) Religious parties.
(c) Politicians.
(d) Moralists.

2. What type of meeting is held at the court on the night of the jury selection?
(a) Prayer.
(b) Evolution.
(c) City council.
(d) Civil rights.

3. What does Drummond say about Cates when Rachel asks about him?
(a) He will crack on the witness stand.
(b) He is a strong man.
(c) He loves her more than anything.
(d) He is fighting a losing battle.

4. Why does Bannister want the front seat in the jury box?
(a) The trial will be a show.
(b) He is incredibly short.
(c) He has terrible vision.
(d) He won't fall asleep.

5. Hornbeck asks Elijah if he is a what?
(a) Reverend.
(b) Evolutionist.
(c) Creationist.
(d) Soldier of the Bible.

6. What do the storekeeper and Mrs. Krebs discuss in Act One?
(a) The weather and the devil.
(b) The innocence of Bert Cates.
(c) The price of milk.
(d) Brady and public opinion.

7. What does Drummond ask Dunlap prior to rejecting him for the jury?
(a) Whether he believes in God.
(b) How he is.
(c) If he loves his mother.
(d) If he reads the Bible.

8. Brady is called Colonel in spite of what?
(a) His inabilily to pronounce it.
(b) His lack of military service.
(c) His inability to spell it.
(d) The fact that he was a general.

9. The first time Brady enters town, who is he with?
(a) Reverend Brown and the Judge.
(b) Timmy.
(c) A newspaper reporter from Washington, D.C.
(d) Mrs. Brady, Reverend Brown, the District Attorney.

11. What is Cates unsure of?
(a) If Rachel loves him.
(b) Whether he has committed a crime.
(c) Whether Drummond is on his side.
(d) If he even likes teaching.

14. Who announces the meeting held at the court on the night of the jury selection?
(a) Melinda.
(b) Drummond.
(c) The judge.
(d) Brady.

15. What does Drummond ask Rachel about her mother?
(a) Whether she was holy.
(b) Why she doesn't support Rachel.
(c) If she divorced Reverend Brown.
(d) Rachel's feelings about her.

1. What does Meeker say impresses him about Brady?

2. How does Melinda respond to Howard's opinion on origin?

3. According to Hornbeck, who is the monkey's greatest descendant?

4. What color are the suspenders Drummond wears to court in Act 1, Scene 2?

5. Where is Inherit the Wind set?

More summaries and resources for teaching or studying Inherit the Wind.