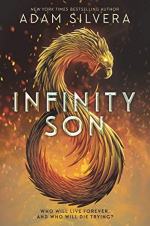 Adam Silvera
This set of Lesson Plans consists of approximately 120 pages of tests, essay questions, lessons, and other teaching materials.

Create a diorama of the Museum of National Creatures.

Discuss with a group whether you would prefer to be a celestial or a reincarnated specter and what powers you would like to have.

Use a Venn diagram graphic organizer to compare how phoenixes are depicted in the book, and how they are depicted in other works of literature. Show similarities and differences.

Create a map of places where characters lived and traveled.

Create a song that you think might have been sung by a phoenix.

Discuss with a group the bargain...

More summaries and resources for teaching or studying Infinity Son.