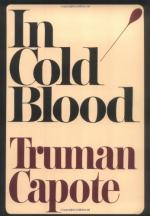 Truman Capote
This set of Lesson Plans consists of approximately 103 pages of tests, essay questions, lessons, and other teaching materials.

1. Why was a passing stranger considered a suspect in the Clutter murders?

2. Which investigator was personal friends with the murder victims?

3. Which of the Clutter children was somewhat eccentric?

4. How many of the C;utter children were still living at home at the time of the murders?

5. How did Smith expect to get the money to pay back everyone he and Hickock had conned?

1. How did Floyd Wells know who committed the murders of the Clutter family?

2. Describe some events describing why Smith's childhood was difficult and unfortunate.

3. Once in Florida, what was the only dream Smith felt he had left?

4. What physical characteristic did Perry Smith and Richard Hickock share?

5. Why was the car that Smith and Hickock drive to Mexico weighed down?

6. Why was Nancy Clutter admired for her energy and industry?

7. Why did Smith and Hickock head for the post office when they finally made it back to Las Vegas?

8. Why did the court assign lawyers for Smith and Hickcock?

9. Who did Hickock blame for the crimes after he and Smith were arrested in Las Vegas?

10. Explain some of the details of Smith's dream.

Write an essay describing this genre. Include opinions and supporting details about the objectivity of the author throughout the book.

Describe in detail the symbolism of the cats and how it is used to represent Smith's life events.

More summaries and resources for teaching or studying In Cold Blood.