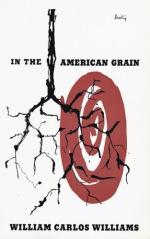 In the American Grain Character Descriptions

Bridget Bishop - This person was put on trial for witchcraft, mainly because she often attacked people and looked at them menacingly.

Daniel Boone - This person was an uncanny woodsman who loved exploring the wilderness.

Aaron Burr - Williams felt that this person had been unfairly condemned by history after killing Alexander Hamilton in a duel.

Samuel de Champlain - This person was a French explorer who spent years in the territories of French Canada.

Christopher Columbus - This person sailed four times from Europe to the New World.

Hernán Cortéz - This person was the conquistador whose encounter with the powerful Aztec empire and its enigmatic leader, Montezuma, is one of the most remarkable stories in world history.

Benjamin Franklin - Williams has a problem with this person, who wrote Poor Richard's Almanac and was an ambassador to France.