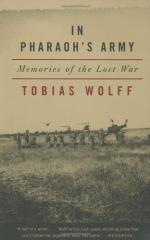 In Pharaoh's Army: Memories of the Lost War Quiz | Four Week Quiz B

This quiz consists of 5 multiple choice and 5 short answer questions through September 11: The Rough Humor of Soldiers.

2. What did Wolff realize reflecting back on the event to follow?
(a) The VC were already starting to kill.
(b) The carnival's presence was part of the VC plan.
(c) The VC were hidden under the restaurant.
(d) The VC had a mole.

3. What was Wolff known for having?
(a) A commanding presence.
(b) A good right hook.
(c) A short temper.
(d) A large apettite.

4. What general was responsible for a parachute accident?
(a) General Westmoreland.
(b) General Maxell.
(c) General Wayland.
(d) General Roberdur.

1. How many people live with Landon?

2. What was the province mainly composed of?

3. Where did Wolff and Hoffman hang out in San Fransisco?

4. How much did Wolff pay the sergeant to stop cooking what he captured?

5. What type of establishment did Wolff and Benet go to?