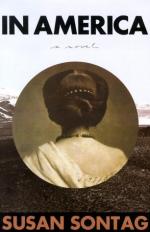 Susan Sontag
This set of Lesson Plans consists of approximately 138 pages of tests, essay questions, lessons, and other teaching materials.

1. As the story opens, the narrator describes the room in which people are conversing and drinking. Who are these people? How does the narrator know them?

The people in the room are fans, friends and family of Maryna Dembowski. The narrator does not know them but instead figures out who they are while observing them. Maryna is an actress and has just performed at the theatre.

2. In Chapter Zero, from whose voice is the story told? Who is the narrator? What does the narrator reveal about herself?

The story is told from many voices, those of Maryna's friends and family, Maryna herself, and the narrator. The narrator is the author, and is from modern times. She has been married and divorced, is a risk taker, and grew up in Southern California and Arizona.

In America from BookRags. (c)2021 BookRags, Inc. All rights reserved.