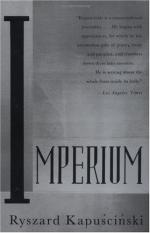 Ryszard Kapuściński
This set of Lesson Plans consists of approximately 117 pages of tests, essay questions, lessons, and other teaching materials.

1. What fills the Caucasus?
(a) Blood revolts
(b) Peaceful protests
(c) A movement to support the government
(d) A feeling of hope

2. What becomes a symbol of sanctuary from oppression in Bashkir?
(a) The music
(b) A flower
(c) Nature
(d) Churches

3. According to Shalamov, what is the West built on?
(a) The army
(b) Ruthless subordination
(c) Industry
(d) Creative invention

4. What type of landscape does Central Asia have?
(a) Desert
(b) Mountain
(c) Valley
(d) Flat

5. What did Fiodorov believe was the most important idea in Christianity?
(a) Resurrection
(b) Joy
(c) Love
(d) Peace

2. According to the author, how much of Central Asia was ruined by the Imperium?

3. How many people attended the meeting at the Vargashovska mine?

4. Who initially leads the meeting?

5. Who ruled the area under Khrushchev and Brezhnev?

1. Describe the landscape of the republics in Central Asia.

2. Describe Ryszard's observation on the Nationalist.

4. Describe the pros and cons of living in Yatusk.

7. What did the actor in the play say about Russia and the October Revolution?

8. Describe the feelings the elite in Moscow had for the Imperium.

9. What is the role of the Imperium in Yakutsk?

10. What was a main problem that people faced with the cotton fields?

More summaries and resources for teaching or studying Imperium.