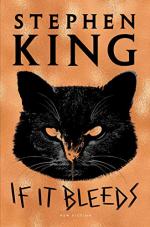 Related Topics
Bag of Bones
Black House: A Novel
Carrie
Cujo
Cycle of the Werewolf
Desperation
Different Seasons
Dolores Claiborne
Four Past Midnight
Gerald's Game
It
Misery
Nightmares & Dreamscapes
Night Shift
On Writing: A Memoir of the Craft
Pet Sematary
Roadwork
Salem's Lot
Skeleton Crew
The Dark Tower VI: Song of Susannah
Stephen King
The Dark Tower: The Wind Through the Keyhole
The Dark Tower Series
The Dark Tower VII: The Dark Tower
The Dead Zone
The Dark Tower II: The Drawing of the Three
The Eyes of the Dragon
The Girl Who Loved Tom Gordon
The Green Mile
The Dark Tower: The Gunslinger
The Long Walk
The Regulators
The Shining
The Talisman (King and Straub novel)
The Waste Lands
Wizard and Glass
Wolves of the Calla
Joyland
Mr. Mercedes
Finders Keepers
End of Watch
Gwendy's Button Box
The Outsider: A Novel
Elevation: A Novel
Doctor Sleep
The Institute
Full Dark, No Stars
Later
Hearts in Atlantis
Everythings Eventual

Stephen King
This set of Lesson Plans consists of approximately 159 pages of tests, essay questions, lessons, and other teaching materials.

2. Mr. Harrigan invested most of Craig's lottery ticket winnings in what type of stock?
(a) Amazon.
(b) Facebook.
(c) Apple.
(d) Blackberry.

3. At Mr. Harrigan's funeral, Craig tucked Mr. Harrigan's iPhone into which location?
(a) The lining of the coffin.
(b) The pants pocket.
(c) Under the collar.
(d) The jacket pocket.

6. One character thinks to himself at the end of the second section of Act III: Thanks, Chuck! that "a whole world falls to ruin" (111) whenever what event takes place?
(a) A wish is made.
(b) A baby is born.
(c) A promise is broken.
(d) A person dies.

7. Which character did Craig call first when he discovered he had a winning lottery ticket?
(a) Mr. Harrigan.
(b) Jeff.
(c) Dad.
(d) Kenny.

10. What sort of business transaction is Chuck conducting during the week he spends in the setting featured in Act II: Buskers?
(a) Attending a conference.
(b) Seeking out clients.
(c) Receiving a business award.
(d) Trying to sell the company.

11. In what position did Craig's dad work throughout his childhood?
(a) Salesman.
(b) Receptionist.
(c) Nurse.
(d) Lawyer.

12. Who was the first person to die as a result of Craig's communication with the late Mr. Harrigan?
(a) Kenny Yanko.
(b) Manuel Lopez.
(c) Kevin Stearns.
(d) Kelvin Armando.

13. What action is Chuck taking throughout the second section of Act III: Thanks, Chuck!?
(a) Playing guitar.
(b) Balancing his checkbook.
(c) Singing.
(d) Dying.

1. Chuck's son kisses the crescent-shaped scar on what part of his father Chuck's body?

2. Janice is heading home while thinking about taking what action when she arrives?

3. How old was Craig when he first began to work for Mr. Harrigan?

4. What sort of activity did Mr. Harrigan mention when he came to Craig's house to offer him a job?

5. In which year did Craig begin to work for Mr. Harrigan?

More summaries and resources for teaching or studying If It Bleeds.

If It Bleeds from BookRags. (c)2022 BookRags, Inc. All rights reserved.