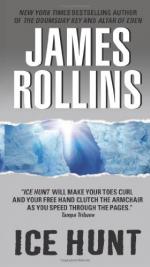 James Rollins
This set of Lesson Plans consists of approximately 124 pages of tests, essay questions, lessons, and other teaching materials.

4. Where does Jenny's father suggest they go when they cannot land at Prudhoe Bay?
(a) Natuakruk Lake.
(b) Kaktovik.
(c) Avatanak.
(d) Camden Bay.

1. If the ice found atop Greenland and the continent of Antarctica melted, how high might the world's oceans rise?

2. How many samples does Connor MacFerran want to core in Chapter 6?

3. At the beginning of Chapter 1, how many fathoms is the USS Polar Sentinel under the polar ice cap?

4. How much younger is Belinda than her husband Bennie?

5. Who is snoring at the beginning of Chapter 5?