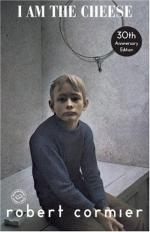 I Am the Cheese Test | Final Test - Medium

2. Who was the relative that Adam uncovered, though he'd been told he had no living relatives?
(a) His mother's sister
(b) His grandfather
(c) His father's sister
(d) His cousin, Amy

3. Adam's arm hurts from the _______ used on him at the hospital during his withdrawal period.
(a) Electroshock
(b) Scalpels
(c) Needles
(d) Elastic

1. What is the name of the German Shepherd that likes to chase Adam on his bike and knock him over?

2. In what city does Adam plan to spend the night during his continuing bike journey?

3. How would the office at the motel be described as Adam walked up to it?

5. Who did Adam see spinning in the air as they died from the impact of another car hurtling toward the group of people?

I Am the Cheese from BookRags. (c)2021 BookRags, Inc. All rights reserved.