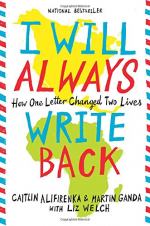 I Will Always Write Back Quiz | Eight Week Quiz E

Caitlin Alifirenka and Martin Ganda
This set of Lesson Plans consists of approximately 160 pages of tests, essay questions, lessons, and other teaching materials.

This quiz consists of 5 multiple choice and 5 short answer questions through Part 5, "A Changing World," Chapters 43-48.

2. What older student at Martin's school is going to the United States to study?
(a) Bonaventure.
(b) Wallace.
(c) Rabbit.
(d) Cornelius.

1. What facility is located down the street from Caitlin's middle school?

2. What does Martin's mother give him before he leaves for school?

3. After Caitlin and Damon fight about her study habits, what grade does Caitlin receive on her psychology test?

4. What do Caitlin and Anne do that makes Wallace uncomfortable?

5. What procedure does Caitlin have done after Christmas?

More summaries and resources for teaching or studying I Will Always Write Back.

I Will Always Write Back from BookRags. (c)2021 BookRags, Inc. All rights reserved.