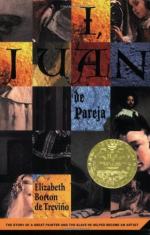 Elizabeth B. de Trevino
This set of Lesson Plans consists of approximately 127 pages of tests, essay questions, lessons, and other teaching materials.

1. What sin does Bartolomy say Juan should confess?
(a) Lying to his mistress.
(b) Hiding his art.
(c) Painting.
(d) Stealing paints.

2. What does Diego paint a picture of after his daughter is engaged?
(a) His daughters as babies.
(b) Paquita.
(c) His wife.
(d) A flowering tree.

4. What does the King ask Don Diego to design for his sister's wedding?
(a) The wedding portrait.
(b) The floral arrangements.
(c) The pavillion.
(d) The dress.

6. What does Diego find that tells him of his daughter's love affair?
(a) Lipstick stains on his apprentice's shirt.
(b) The red flower.
(c) A picture of Paquita.
(d) A letter.

7. What job is Juan given after the problem of the painting is solved?
(a) Household worker.
(b) Don Diego's assistant.
(c) Apprentice Painter.
(d) Tannery assistant.

9. What does Diego's wife say being married to a painter has been like?
(a) Heaven.
(b) Hell.
(c) A constant adventure.
(d) A long journey.

11. What does Don Diego tell Juan as he is nursing his wound from the ship?
(a) He can ask what he wants of him.
(b) He is the best friend he has ever had.
(c) He is a good slave with a pure heart.
(d) He can do what he wants till he is cured.

12. What happened to Mistress while Juan and Don Diego were in Italy?
(a) She got sick.
(b) The house was robbed.
(c) She broke her leg.
(d) She was heavily taxed.

14. What does Juan's painting remind the King of?
(a) His late daughter's laughter.
(b) His merciful nature.
(c) When Juan cured his dog.
(d) Juan's first time at a banquet.

15. Why does the King ask Don Diego to design something for his sister's wedding?
(a) To distract him.
(b) To cheer him up.
(c) To give him financial aid.
(d) To get the best for his sister.

1. What was wrong with the King's favorite dog?

2. What is Juan worried will be found while he is traveling to Northern Spain with Don Diego?

3. Who was leery about Diego painting a portrait on his second trip in Italy?

4. Why does Juan say he no longer takes Communion?

5. What was Don Diego surprised about when he saw Bartolomy's art?