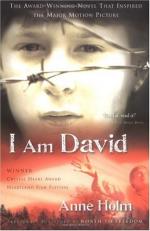 Anne Holm
This set of Lesson Plans consists of approximately 133 pages of tests, essay questions, lessons, and other teaching materials.

1. Explain what the man tells David to do to escape.

David is supposed to wait until he sees a match strike as the guards change, and then he is to climb the fence of the camp and run. He is to find a compass near a tree, and proceed south, until he reaches Salonika. From there, he is to board a ship for Italy, and then travel north until he reaches Denmark, where he will be safe.

2. Explain why David is reluctant to escape, and why he does it, despite his reservations.

David fears the escape plans are a trap, since the man is a guard, and since he believes the man hates him. He decides to escape anyway, however, because he hopes the guards, when they inevitably catch him, will shoot him, thereby ending his unhappy existence.

I Am David from BookRags. (c)2020 BookRags, Inc. All rights reserved.