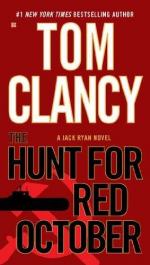 Tom Clancy
This set of Lesson Plans consists of approximately 101 pages of tests, essay questions, lessons, and other teaching materials.

1. What is the name of the submarine filled with explosives for its last mission?
(a) Kennedy
(b) Red October
(c) Porgy
(d) Ethan Allen

2. What other vessel heads off to meet the other two ships?
(a) Porgy
(b) Deep sea rescue vehicle
(c) Politovskiy
(d) Kennedy

4. Which of the following seems to be of most concern to Jack Ryan?
(a) Family
(b) Debt to country
(c) Work
(d) History

5. Why doesn't the second torpedo ignite when it hits the Red October?
(a) The Dallas destroyed the torpedo
(b) The Red October deactivated it
(c) The vessels are to close to each other
(d) It is defective

8. Which of the following words can be used to describe how the planes from both sides know where the other planes are located?
(a) Spying
(b) Tracking
(c) Attacking
(d) Locating

10. Which vessel does the pentagon decide should begin tracking the Red October?
(a) Porgy
(b) Kennedy
(c) Invincible
(d) Dallas

11. Why do the officers tell the crew they will stay on board?
(a) To destroy it
(b) To create a trap for the Americans
(c) To fix the problems
(d) To safely return the ship to Russia

12. Which of the following has it been confirmed by reading are involved in the defection plot on the Red October?
(a) Jack Ryan
(b) KGB
(c) Chief Engineer
(d) Cook

13. Most of the incidents on the tenth day can be referred to as which of the following?
(a) Major
(b) Minor
(c) Massive
(d) Mistakes

14. Weapons on both sides can best be described as what on the tenth day?
(a) Used
(b) On standby
(c) Prepared for attack
(d) Stored

15. What happens to Williams and Ramius?
(a) Healed by the doctor
(b) Evacuated to a new ship
(c) Taken into custody
(d) Died

1. Which of the following equipment can be used to track vessels and planes in the ocean?

2. What two ships accompany the Red October to its secret destination?

3. Where is the secret port?

4. Which of the following words best describes the situation on the tenth day?

5. What message does the Invincible send to the Red October?

More summaries and resources for teaching or studying The Hunt for Red October.

The Hunt for Red October from BookRags. (c)2021 BookRags, Inc. All rights reserved.