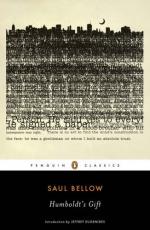 Saul Bellow
This set of Lesson Plans consists of approximately 134 pages of tests, essay questions, lessons, and other teaching materials.

How might or might not have things been different for Humboldt had Adlai Stevenson won the election? Would he have wanted the chair at Princeton so badly? Would he have ended up with a place in the new administration?

Based upon the descriptions given, draw a picture of Humboldt.

Draw a caricature of Ronald Cantabile.

Write Charlie Citrene's obituary as it would appear in the New York Times.

Write a scene of only dialogue. The scene is between Kathleen and Humboldt with Kathleen standing up for herself regardless of her husband's physical strength.

Using any scene from the book, use poetry to convey its meaning.

As a class project, students can be selected or volunteer to act as Judge Urbanovich, the three lawyers, Denise, and Charlie. A court scene script will be written collectively...