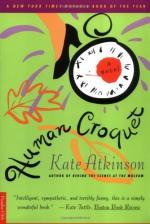 1. How does Maude respond to what Violet Angela tells her?
(a) Maude kills Herbert.
(b) Maude divorces Herbert.
(c) Maude confines Violet to her room.
(d) Maude becomes hysterical and is confine to an institution.

5. Who does Lady Margaret say is responsible for some bruises on her?
(a) Master Shakespeare.
(b) Herself from falling.
(c) Robert Kavanagh.
(d) Sir Francis.

7. Who is having a conversation in "Experiements With Aliens"?
(a) Gordon and Charlotte.
(b) Gordon and Eliza.
(c) Isobel and Gordon.
(d) Charles and Isobel.

8. What does Gordon do one day when Eliza is sleeping?
(a) Goes through her belongings.
(b) Writes her a letter.
(c) Cuts a lock of her hair.
(d) Draws a picture of her asleep.

11. Where does Gordon meet Eliza?
(a) At the sidewalk in front of the building.
(b) At the hospital.
(c) He finds her inside the building.
(d) At the city morgue.

14. What does Violet Angela intend to do when she returns to Maude and Herbert's house after leaving?
(a) Ask their forgiveness.
(b) Destroy everything in the house.
(c) Ask who her real mother and father are.
(d) Kill them.

1. What is Audrey's occupation?

2. What does Herbert do to his "daughter"?

3. Who is the person sitting next to Gordon?

4. What does Lady Fairfax find when she enters Robert Kavanagh's cabin the first time?