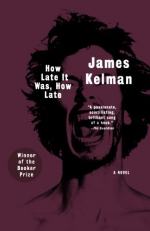 How Late It Was, How Late Test | Final Test - Medium

James Kelman
This set of Lesson Plans consists of approximately 117 pages of tests, essay questions, lessons, and other teaching materials.

1. Sammy tells Peter that his blindness was caused by what?
(a) Police brutality.
(b) Getting hit by a car.
(c) Falling from a building.
(d) A fight with Helen.

2. At Sammy's home, what do Peter and his friend take pictures of?
(a) The family silver.
(b) Sammy's bruises.
(c) Helen's room.
(d) Peter and his father.

4. Why do the police believe Sammy saw Charlie over the weekend?
(a) Sammy's pen was in Charlie's coat.
(b) They were following him.
(c) Leg (Donaghue) reported it.
(d) Charlie admitted it.

1. What evidence of the police beating does Sammy show the doctor on Monday morning?

2. After the second interrogation, why is Sammy worried about being sent back to prison?

3. After losing his sight, why is Sammy taken back to the police station?

4. During his drunken weekend at the pub, Sammy claims he talked about what?

5. After his meeting with the Monday morning doctor, what does Sammy plan to sell?

1. What are the steps Ally asks Sammy to take, to prepare for pursuing his case?

2. Why do the bouncers refuse to let Sammy enter Quinns?

3. When Sammy awakens to a knock in the middle of the night, what is he afraid of?

4. What is the method the police use to bring Sammy in for questioning?

5. Before going to Glancys, there are signs that Sammy is not able to take care of himself fully. What are some of these signs?

6. During the police interrogation, what do they use to bribe Sammy?

7. What do the police tell Sammy about the report he filed against them?

8. What behaviors of Sammy's do the police deign as suspicious?

9. Why is Sammy angry at himself for getting upset with the bouncers at Quinns?

10. The police claim Leg (Donaghue) told them what about Sammy's weekend?