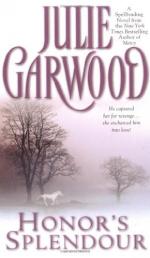 2. Madelyn has a plan to escape from Louddon's castle to what location?
(a) Scotland.
(b) Her great uncle's home.
(c) England.
(d) A nunnery.

3. Madelyne says various things while delirious and Duncan informs her of these things when they are in what location?
(a) In the hall.
(b) His chamber.
(c) Her chamber.
(d) Outside.

5. What is Duncan doing when Madelyne sees him out her window?
(a) Taking a ritualistic swim.
(b) Walking to the lake.
(c) Bathing.
(d) Dressing.

6. In her delirium, what does Madelyne tell Duncan about Louddon?
(a) Loudon is in love with her mother.
(b) Louddon sneaks into her room every night and stares at her.
(c) Louddon cannot read.
(d) Louddon does not like women.

9. Why does Madelyne name Duncan's horse Silenus?
(a) The horse is silvery-white in color.
(b) Silenus means "stand still for me" in Latin.
(c) The horse is strong and silent.
(d) Silenus is the name of a god that is wild and untaimed.

12. While dreaming, who is the dream character that comes to her aid over and over again?
(a) Odysseus.
(b) Zeus.
(c) Father Berton.
(d) Polyphemus.

1. What is hurled during family dinners in the hall?

2. When Louddon leaves his castle, in which direction does Duncan assume he goes?

3. Who teaches Madelyne to read and write when she is young?

4. Whose cast-off garments does Madelyne take in to make smaller?

5. Who wants to save Madelyne but is refused?