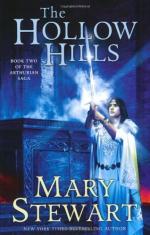 4. Who does Arthur charge after when he believes Merlin is in trouble?
(a) Cador.
(b) Merlin.
(c) Ralf.
(d) Cador's soldier.

1. What does Merlin surmise from Uther's questions about Arthur?

2. Where does Merlin watch the battle with the Saxons?

3. What does Merlin not mention to Uther after the battle?

4. Where is Macsen's sword during the feast?

5. Where does Arthur find the sword on the island in the middle of the lake?

1. What is the significance of Morgause entering the makeshift hospital where Merlin and Arthur are?

2. Why does Lot of Lothian protest Uther declaring his heir at Luguvallium? What are his true motives behind the protests?

3. What trap is set for Merlin as he rides to the Perilous Chapel? Who saves him?

4. What do the lords and commoners find when they reach the Perilous Chapel?

5. Why does Cador come to visit Merlin in the forest while Arthur is in Bilis' cave? How does he approach Merlin?

6. What do Uther and Merlin discuss during their meeting after the battle with Colgrim? What does Merlin perceive about Uther and his questions?

7. What impact has the battle with Colgrim had on Uther's standings in the kingdom?

8. How does Uther make the announcement during the feast that Arthur is his heir to the throne?

9. How does the battle with Colgrim end? Why is this important?

10. How does Ector react to Lot's protests after Uther dies following his abdication of the throne?