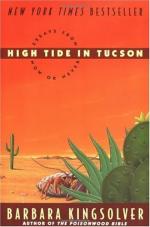 High Tide in Tucson: Essays from Now or Never Chapter Abstracts for Teachers

Barbara Kingsolver
This set of Lesson Plans consists of approximately 116 pages of tests, essay questions, lessons, and other teaching materials.

• In a high school that was fairly limited and provincial, Barbara Kingsolver says she was saved by reading books.
• Books introduced her to ideas like...

More summaries and resources for teaching or studying High Tide in Tucson: Essays from Now or Never.