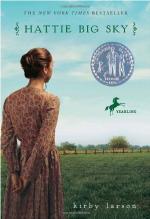 Kirby Larson
This set of Lesson Plans consists of approximately 141 pages of tests, essay questions, lessons, and other teaching materials.

Learn about the rules of homesteading in a place you would like to live. Make a chart showing the rules.

Create a chart showing where Spanish influenza occurred in 1918, how many people became ill and how many died.

What Hattie Had to Deal With

Research homesteading on the prairies of Montana in the early 20th century, and make a list of the various situations Hattie probably had to deal with while living there.

Draw a map to scale showing Vida, Wolf Point and the closest large city in Montana. Mark an X in the likely area that Hattie's homestead is located from the description in the book.

Treatment of Germans in WWI

Research the treatment of Germans in the United States during WWI, and discuss the ways and whys of their treatment.