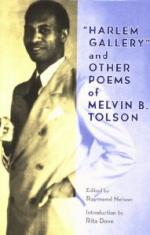 Melvin B. Tolson
This set of Lesson Plans consists of approximately 103 pages of tests, essay questions, lessons, and other teaching materials.

2. What does the narrator in "A Hamlet Rives Us" fail to acknowledge?
(a) His editor.
(b) His mother's divorce.
(c) His daughter's marriage.
(d) His friend's grief.

6. What sounds does the poet hear in "Rendezvous With America"?
(a) Cats and dogs.
(b) The sounds of revolution.
(c) The sounds of industry.
(d) Bells and whistles.

7. Who are the bad men in America according to the poem "Rendezvous With America"?
(a) Republicans and Democrats.
(b) Ku Klux Klan and anti-Semites.
(c) Politicians.
(d) Lawyers.

13. In the poem "Rendezvous With America," what is the population that arrives in America like?
(a) Asian.
(b) Black.
(c) White.
(d) Diverse.

1. Who does the skull the mountain climber finds belong to?

2. Who are the white men mentioned in "Rendezvous With America"?

3. What should separate the rose and the thorn in "The Unknown Soldier"?

4. How does the economist in "A Primer for Today" claim change occurs?

5. What does the historian want to know in "A Primer for Today"?

More summaries and resources for teaching or studying Harlem Gallery.