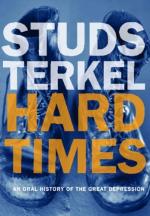 Studs Terkel
This set of Lesson Plans consists of approximately 140 pages of tests, essay questions, lessons, and other teaching materials.

1. Why did Martin DeVries hate Roosevelt?
(a) Roosevelt came from money.
(b) Roosevelt tried to pack the court.
(c) Roosevelt attacked the free market system.
(d) Roosevelt got America into World War II.

2. Which of the following is not an implement that interviewers in The March say was used to disperse marchers?
(a) Bayonets.
(b) Water cannon.
(c) Guns.
(d) Tear gas.

3. What does Diane personally think about the suffering of the 1930's in Sgt. Pepper's Lonely Hearts Club Band?
(a) She has no opinion.
(b) She thinks America reaped what it sowed in the 1920's.
(c) She thinks it is exaggerated by those who experienced it.
(d) She thinks the suffering was focused disproportionately on minorities.

4. Why did Win Stracke lose his work as a balladeer?
(a) His drinking.
(b) The oversaturation of the profession in the 1930's.
(c) His loss of a hand.
(d) His left-leaning views.

5. What did Arthur Robinson do before entering the financial markets?
(a) He was a tobacco picker.
(b) He was an actor.
(c) He was a school teacher.
(d) He was a war correspondent.

6. Who were the "service department" of Detroit?
(a) Hired thugs working for management.
(b) The strike organizers.
(c) The series of vendors who provided food for strikers.
(d) The government officers who were on the company payroll.

8. What inversion of racial relationships happened regarding Robin Langston's father during the Depression?
(a) He was invited to move into a whites-only neighborhood.
(b) White neighbors hocked their radios to him.
(c) He was allowed to join the pipe-fitters' union.
(d) He began hiring white workers.

9. What happened to one of Daisy Singer's favorite parks during the Depression?
(a) It fell into disrepair.
(b) It was closed by the broke municipal government.
(c) It became a site of weekly worker protests.
(d) It became a shantytown.

11. Who was the one black student in Terkel's college class?
(a) An ancestor of Frederick Douglass.
(b) Medgar Evers.
(c) An African prince.
(d) Marcus Garvey's grandson.

12. Where did Arthur Robinson keep thousands of dollars during the bank holiday?
(a) In a Swiss account.
(b) In a coffee can.
(c) Under his mattress.
(d) In his sock.

13. What about modern America mystifies Diana Morgan?
(a) The widespread use of drugs.
(b) America's involvement with Vietnam.
(c) The election of Richard Nixon.
(d) Those who ignore poverty.

15. How does E.D. Nixon's campaign to unionize the sleeping car porters end?
(a) The porters are given a vote and they vote against the union.
(b) They are all fired.
(c) The union is instituted.
(d) Only NIxon's train line is unionized.

1. In what war did the Bonus marchers fight?

2. In his interview, Doc Graham says that in the 1930's he was the country's best what?

3. What term best describes the nature of the changes that happened after the 1929 Crash, from Terkel's perspective?

4. What young officer assisted MacArthur in dispersing the Bonus Marchers?

5. What product did Benton manage after the Depression?