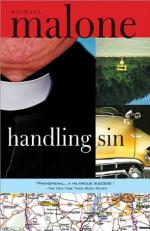 8. What accompanies the buried treasure?
(a) A letter from a Confederate sergeant.
(b) A love letter from the Civil War era.
(c) A photograph of the general who hid it.
(d) Pee Wee Jimson's will.

9. According to Earley in Part 3, Chapter 32, what is the importance of the library bust?
(a) It contains a code that might lead to treasure.
(b) It rightly belongs to the Hayes family.
(c) It is a Civil War artifact.
(d) The value of its gold construction.

12. Where is the Cadillac the men have used along the journey as they make the drive to Atlanta?
(a) In storage.
(b) They sold it.
(c) Pulled by the van.
(d) In the semi.

1. According to Earley in Part 3, Chapter 32, what is the importance of the trunk?

3. What does the stalled bus carry that Raleigh and his friends find on their way to Atlanta?

4. Who conducts random interviews of people in their search for one person, after Raleigh, Gates and Mingo leave the estate?

5. What is the name of the singer that Raleigh almost gets intimate with?