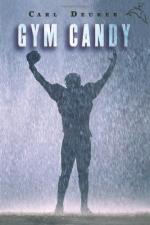 Carl Deuker
This set of Lesson Plans consists of approximately 129 pages of tests, essay questions, lessons, and other teaching materials.

• Mick Johnson's earliest memory is of playing football with his father when he was four.

• Mick's father, though a former football star, is still very much in shape, and the Johnson family basement is full of his father's awards and framed newspaper articles.

• Mick's mother is a former gymnast who enjoys competition, but doesn't feel the need to pressure Mick the way her husband Mike does.

• While his mother works at a bank in the loan department, Mick's father is the sidekick on the local radio show "Ben in the A.M." with Ben Braun.

• After seventh grade, Mick's mom stops coming to his games after he is nearly knocked unconscious; she is too afraid he will be severely injured like his father.

More summaries and resources for teaching or studying Gym Candy.