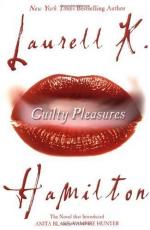 • Anita Blake, vampire slayer, sits at her desk across from Willie McCoy, a new vampire. Willie wants Anita to investigate a recent string of vampire murders.
• Anita, Monica, and Catherine go to Guilty Pleasures, the world's only vampire strip club, for Catherine's bachelorette party.
• Anita is called to a crime scene where the police have found two bodies. As a vampire expert and part of RPIT, Anita is often called in to assess the situation.
• Anita goes back to Guilty Pleasures after midnight to get Monica and Catherine. Catherine is on stage. Anita goes to Catherine and notices that her friend is bespelled by a vampire named Aubrey.
• Anita learns that the entire evening was planned by Nikolaos, Jean-Claude's master and Master of the City. Monica took part in the plan to lure Anita to Guilty Pleasures.

More summaries and resources for teaching or studying Guilty Pleasures.