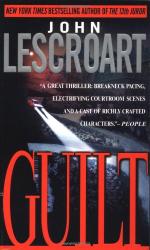 1. Who does Christina say that Diane is?
(a) A nurse practitioner.
(b) A physician's assistant.
(c) A hospital administrator.
(d) A midwife.

3. What does Mark tell Wes that his plans are?
(a) He wants to leave the country.
(b) He wants to turn himself in for the murders.
(c) He wants to divorce Christina.
(d) He wants to set up some international offices.

4. What does Samantha try to tell Wes about Mark?
(a) He is a fraud.
(b) He will be a lousy father to the new baby.
(c) He is a dangerous man.
(d) He is a brilliant businessman.

5. Who testifies for the prosecution that there was no one occupying the spot on the driving range claimed to be used by Mark on the day of the murder?
(a) Edgar Morton.
(b) Paul Hines.
(c) Michael Ross.
(d) Matt Simons.

6. What happens to Mark and Christina's relationship after the trial?
(a) They get married.
(b) They part company.
(c) They want to date for awhile.
(d) They agree to be friends.

8. When he takes the stand, where does Mark say he was on the day of Sheila's murder?
(a) The driving range.
(b) In court.
(c) At a doctor's appointment.
(d) On a business trip.

10. What did Mark think would wipe away all of his and Christina's marital problems?
(a) When she saw him holding their son.
(b) When they had some counseling.
(c) When he took her to the Caribbean.
(d) When he bought her some new jewelry.

12. What does Wes note when he re-enters the discussion room at the courthouse?
(a) Christina is crying.
(b) It is charged with sexual tension.
(c) There is a gas leak in the building.
(d) Several people are missing.

13. What does Wes state in court that Mark did not do at the house the night of the murder?
(a) Left Sheila alone.
(b) Make it look as if someone broke into the house.
(c) Change clothes.
(d) Woke up the kids.

1. Who admits that he/she is not certain of Mark's innocence?

2. What does Christina tell Abe about her relationship with Mark?

3. What does Abe realize about Diane?

4. What does Wes make Abe admit to during questioning?