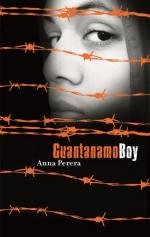 Anna Perera
This set of Lesson Plans consists of approximately 154 pages of tests, essay questions, lessons, and other teaching materials.

2. Khalid recalls collecting money for charity for what country, then stealing the money, in Chapter 14?
(a) Ethiopia.
(b) Russia.
(c) Argentina.
(d) Bosnia.

6. The fellow prisoner that Khalid meets in Chapter 8 tells him that he was apprehended at the border to what country?
(a) Afghanistan.
(b) Israel.
(c) Morocco.
(d) Egypt.

7. What is the name of the American soldier wearing jeans and a white shirt that holds out his hand to Khalid during the processing “as if welcoming the shivering, naked Khalid to Afghanistan” in Chapter 10?
(a) Bruce.
(b) Jack.
(c) Jim.
(d) Anthony.

10. The Pakistani-looking man who interrogates Khalid in Chapter 6 takes what item from Khalid’s possession when he first speaks to him?
(a) His watch.
(b) His ring.
(c) His bracelet.
(d) His necklace.

11. In the beginning of Chapter 13, the narrator states that there is nothing in the cell that holds Khalid aside from what?
(a) An Oriental rug.
(b) A floor covered in straw.
(c) A sink and a bed.
(d) A blue mat and a toilet.

15. What is the name of the woman who comes to question Khalid in Chapter 6 and is described as being about thirty-five, with straight brown hair?
(a) Angela.
(b) Michelle.
(c) Adriana.
(d) Sarah.

1. What is the capital city of Pakistan?

2. In what English city has Khalid’s dad said to have worked as a lunch chef for the past ten years, in Chapter 1?

3. The soldier named Michael tells Khalid in Chapter 12 that he’s what?

4. Where in Pakistan did Khalid’s father grow up?