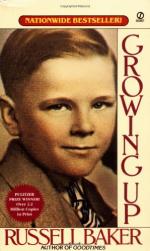 2. What major travel institution was located in Brunswick?
(a) The American Airlines hub.
(b) The Ocean Liner travel agency.
(c) The B&O Railroad Line.
(d) The Stagecoach Station.

3. What happens to Benjamin after he has been drinking?
(a) He always gets lost.
(b) He loses his short term memory.
(c) He becomes violently ill.
(d) He sleeps for days.

4. How does Lucy meet Benjamin, Russell's father?
(a) They meet at a church social.
(b) His Model-T breaks down in front of the schoolhouse.
(c) Lucy's Papa introduces them.
(d) His son is one of Lucy's students.

5. What is Russell's earliest memory?
(a) A cow poking its head into his crib.
(b) His mother rocking him to sleep.
(c) Eleven's bulging biceps.
(d) The yellow house across from his grandmother's house.

1. To what brotherhood did Grandfather George belong?

2. What does Lucy do after the death of Papa to make ends meet?

3. Why were Lucy and Benjamin in a hurry to get married?

4. To what ailment does Russell's mother succumb?

5. According to everyone in town, where was Annie Grigsby born?