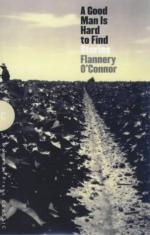 Flannery O'Connor
This set of Lesson Plans consists of approximately 106 pages of tests, essay questions, lessons, and other teaching materials.

1. Who does Grandma recognize the driver as?
(a) He first love
(b) The Misfit
(c) That man off the TV
(d) He long lost son

3. What reason does the Grandmother give for not going to Florida?
(a) There is a hurricaine approaching the area
(b) Florida is too expensive
(c) They have already been
(d) The children will be bored

4. What does the Misfit call the psychiatrist at the penitentiary?
(a) A mind sucker
(b) A head doctor
(c) A mental agent
(d) A fool

6. What does the Misfit talk to Grandmother about when they are alone?
(a) Death
(b) His mother's apple pie
(c) Love
(d) Jesus

7. What reason does Grandmother say a black boy ate the melon?
(a) He was hungry
(b) He was jealous of Edgar
(c) He was obsessed with water melons
(d) He saw the initials E.A.T.

8. What does Grandmother tell a story about?
(a) Her last trip to Florida
(b) A man who once courted her
(c) Her dead husband
(d) Her old dog

9. Why does Grandmother hope she is injured?
(a) So she won't have to go to Florida
(b) So Bailey won't be angry at her
(c) So they can spend more time at the plantation
(d) So she can get more attention

11. What is the baby doing before they kill him?
(a) Playing with its mother's hair
(b) Crying
(c) Sucking its thumb
(d) Sleeping

12. Why are the children disappointed?
(a) The cat has gone
(b) Their comic books flew out of the window
(c) No one has died
(d) They are still not at the plantation

13. What does the Grandmother ask the Misfit?
(a) If he would shoot an old lady
(b) If he has a cigarette
(c) If he believes in the devil
(d) If he has a soul

15. What does the Misfit say is the only thing he gets pleasure from?
(a) Sex
(b) Meaness
(c) Murder
(d) Talking to old people

1. What does the Misfit talk about when Mother asks where they have taken Bailey?

2. Who is Grandmother looking at when she screams Bailey's name?

3. What two people return from the woods?

4. How would John Wesley deal with the misfit?

5. Why does Bailey say they are not allowed inside the house?

More summaries and resources for teaching or studying A Good Man Is Hard to Find.

A Good Man Is Hard to Find from BookRags. (c)2022 BookRags, Inc. All rights reserved.