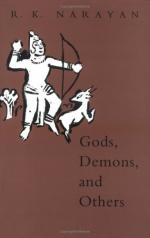 6. What beautiful young princess does Sikhi-Dhvaja's father arrange for him to marry?
(a) Chinnamasta.
(b) Chandra.
(c) Chudala.
(d) Chamunda.

8. What does Chedi tell the Ultimate God he wants to wield in Viswamitra?
(a) The Adya Divaa.
(b) The Tasya Vaartaa.
(c) The Brahma Astra.
(d) The Tasya Aagamana

9. What is the name of the young male aspic Chudala disguises herself as to appear to her husband?
(a) Kumbha.
(b) Kacha.
(c) Chudala.
(d) Lavana.

15. Who is the presiding god of wisdom and acumen in Yayati?
(a) Kacha.
(b) Brihaspati.
(c) Devayani.
(d) Sukracharya.

1. What great sage is master of the Sanjivini mantra in Yayati?

2. What sage does Kumbha claim put a curse on him in Chudala?

3. Chudala, disguised as a young male aspic, tells Sikhi-Dhvaja that renouncing one's external possessions is not enough. He must also cultivate a detachment that will render him unaffected by __________.

4. What forces Lavana's family to move from their home in the magical world in Lavana?