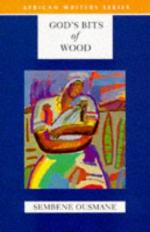 Ousmane Sembène
This set of Lesson Plans consists of approximately 121 pages of tests, essay questions, lessons, and other teaching materials.

2. In "Chapter 6", where is Beaugosse when he argues about the strike?
(a) Ramatoulaye's house.
(b) Management offices.
(c) The marketplace.
(d) Union offices.

3. What angers Niakoro about speaking with Ad'jibid'ji in "Chapter 1"?
(a) How she speaks French.
(b) Her poor use of grammar.
(c) How gossipy she is.
(d) Her short attention span.

4. What makes Ramatoulaye consider apologizing to the other women in "Chapter 9"?
(a) Starting a fire.
(b) Getting arrested.
(c) Seeing a dead body.
(d) Balza asking her to.

13. What was Bakayoko's role before he went missing?
(a) Head engineer.
(b) Local farmer.
(c) School teacher.
(d) Union leader.

1. Why does Dejean want to start a rival union?

3. How does N'Deye Touti feel about the women confronting the police?

5. Why does Tiemoko visit Bakayoko in "Chapter 7"?