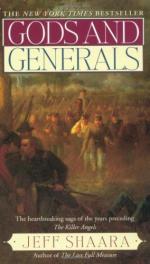 Jeffrey Shaara
This set of Lesson Plans consists of approximately 144 pages of tests, essay questions, lessons, and other teaching materials.

1. When does Virginia secede from the union?

2. Who does not respond well to the news that Chamberlain has joined a regiment?

3. What rank does Lee make Jackson when he comes seeking an appointment?

4. Where would Chamberlain have gone had he become a soldier instead of an academic?

5. Where does Hancock wait so long to get orders from during his time in Los Angeles?

1. How do the leaders of Bowdoin College respond to Chamberlain's speech to his students about joining the war?

2. What leads President Davis to relieve Johnston from his command?

3. What tension exists in California (in addition to the possibility of civil war) when Hancock is introduced into the text?

4. Why do Dr. Junkin and Jackson disagree about the forthcoming civil war?

5. What has the Union Army done during its first attack on Richmond?

6. Why is the Confederacy energized by the Battle of Bull Run?

7. How successful is Chamberlain during his hunting trip when he is first introduced in the text?

8. Where is Lee's family estate located?

9. What responsibility does Lee give Jackson when Jackson comes to him seeking an assignment in Virginia's forces?

Present a well-reasoned paper arguing whether the reader is supposed to find Lee a likable (patriotic, dedicated, intelligent) character OR an unlikable (fighting for slavery, morose, rigid) character. Make sure to use specific examples from the text to support your thesis.

Historical fiction, and "Gods and Generals" in particular, are an especially popular type of novel. Discuss at least 4 aspects of Shaara's writing style that resonates so strongly with such a large audience, citing specific examples from the text to support your thesis.

More summaries and resources for teaching or studying Gods and Generals.