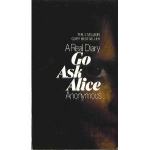 In Your Shoes - Character Analysis

Choose a character from Go Ask Alice (randomly from a hat) and prepare a thirty second presentation in which you introduce yourself to the class as that character.

In a small group, write a short script in which one of you is the host of a talk show, and at least one other person is a character from the book being interviewed on the show.

Choose one part of the story and draw a comic strip of at least 5 panels depicting it.

In a group, make a timeline of the events of the story. Make sure to include illustrations with each event - be creative (but not inappropriate)!

You've been chosen to direct...