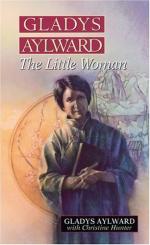 Gladys Aylward
This set of Lesson Plans consists of approximately 111 pages of tests, essay questions, lessons, and other teaching materials.

2. What showed Gladys that the country of her birth had lost its way spiritually?
(a) A newspaper.
(b) A photograph.
(c) A book.
(d) A letter.

3. Which of Gladys's children wanted to return to Yangcheng, although it was still dangerous?
(a) Mrs. Ching.
(b) Mr. Lu.
(c) Ninepence.
(d) Chu En.

4. The questionnaires given to the university students evaluated what?
(a) Their income.
(b) Their spirituality.
(c) Their loyalty to the government.
(d) Their losses from the war.

1. From where did Gladys preach to the prisoners?

2. Why could Gladys not sleeping during the first night at the lamasery?

3. After being bombed, the mule inn was used for which task?

4. Gladys believed she was told that the Lord would bless the church in how many days?

5. Who had tea with Gladys and showed her a box left by a missionary?

1. How did Gladys get a stethoscope for Chu En?

2. Why did Lao Dah interrogate Gladys?

3. Were the lamas surprised by the visit of Gladys and Dr. Huang?

4. What was the purpose of the questionnaire handed out by Communist officials?

5. Were the Christian Chinese students who were gathered into a town square courageous?

6. Did Lao Dah's life have a happy ending?

7. Do you think Gladys should have acted as a spy for the Chinese general?

9. Was Gladys wise to flee with the Chinese army in Chapter 10?

10. What prompted Gladys to return to England?

More summaries and resources for teaching or studying Gladys Aylward: The Little Woman.