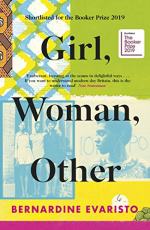 Bernardine Evaristo
This set of Lesson Plans consists of approximately 103 pages of tests, essay questions, lessons, and other teaching materials.

Girl, Woman, Other is set largely in England and revolves around the lives of 12 black women and their experiences with race, sexuality, gender expectations, and oppression. How do the experiences of these women differ based on their lives in England versus their lives if they lived in the United States? Prepare a presentation that looks at race, culture, sexuality, and gender expectations in the U.S. and England.

Look in your local newspaper or archives for an article that involves some aspect of the novel and bring it to class. You will present it in front of the class and explain how it relates to the novel.

Prepare a draft for a film adaptation of Girl, Woman, Other. How would you translate this narrative to film structure?

Prepare a cast list as though you are a casting...