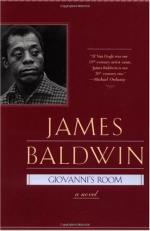 James Baldwin
This set of Lesson Plans consists of approximately 104 pages of tests, essay questions, lessons, and other teaching materials.

1. After the conversation with Giovanni, what does David feel for him?

2. What happens to David's attraction to Hella, after the conversation with Giovanni?

3. Who owns the bar David and Jacques attend after David is evicted?

4. What were David and Joey doing when David realized he was attracted to him?

5. What significant person scolds David for his drunk driving accident?

1. In retrospect, what does Jacques regret regarding Giovanni?

2. What embarrasses David during his conversation with Giovanni?

3. Why does the cab ride seem to take forever, once the bar is closed and David is with Giovanni?

4. When David became injured from driving drunk, how did his father react?

5. What advice does Jacques give to David, regarding Giovanni?

6. What judgment does Giovanni have for the country of France?

7. How does Giovanni die?

8. When David and Joey are swimming together, what is David's first hint that Joey may be attracted to him as well?

9. What details does David remember about his Aunt Ellen's appearance?

Write a brief essay to support or refute the following statement, citing examples from the text: David primarily becomes involved with Giovanni because he does not want his youth to pass him by.

David has a confusing relationship with Hella. Although he believes he feels love for her, he knows the relationship has no future. Analyze the various obstacles David and Hella would have to overcome in order to share an intimate, loving relationship.

Paris serves as a vibrant backdrop in the story. Write an essay describing the city of Paris and how it adds to the story.

More summaries and resources for teaching or studying Giovanni's Room.