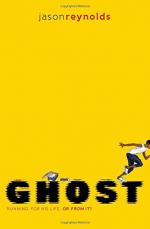 Related Topics
All American Boys
Long Way Down
For Every One
Stamped: Racism, Antiracism, and You
For Every One (poem)
Ain't Burned All the Bright
Stuntboy, in the Meantime

Jason Reynolds
This set of Lesson Plans consists of approximately 122 pages of tests, essay questions, lessons, and other teaching materials.

What do you think Jason Reynolds is like as a person? What would your life be like if you emulated him? What can you tell of him as a role model? What would you like to know about him?

How would you advertise Jason Reynolds’s works to readers? What publicity outlets would you use? What strategies would you use to reach potential readers?

If you were an editor with Ghost on your desk, what changes would you ask for?

Write a short story in which this book...