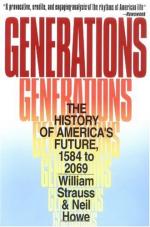 Strauss and Howe
This set of Lesson Plans consists of approximately 102 pages of tests, essay questions, lessons, and other teaching materials.

8. Around 1900, what were wagons and streetcars responsible for?
(a) The rise in crime.
(b) The increase in distribution of goods.
(c) The death of lost city kids.
(d) The speed of city living.

12. Who complained that the Apollo mission gave him a "guilty conscience"?
(a) Richard Nixon.
(b) Anthony Lewis.
(c) Ted Kennedy.
(d) John Kennedy.

1. Which President regretted the fading memory of World War II?

2. Who is a sample member of the Great Power cycle of American history?

3. What did George Bush do during WWII?

5. Who are coming of age in an inner-driven era?

More summaries and resources for teaching or studying Generations.