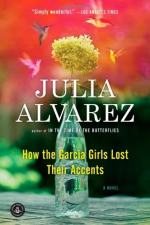 Julia Álvarez
This set of Lesson Plans consists of approximately 154 pages of tests, essay questions, lessons, and other teaching materials.

1. When the mother said the girls were going to make her crazy, where did she say she would end up?
(a) In Belleview.
(b) Back on the island.
(c) On the streets.
(d) In the river.

5. What was the secret phrase that the mother sent to Don Victor to tell him that there was trouble?
(a) To come pick up his tennis shoes.
(b) To come to the house to eat.
(c) To go to his office.
(d) To go play tennis with her husband.

6. Where was Yolanda seated in her 4th grade class?
(a) In the front facing the class.
(b) In a special seat in the front row.
(c) Off to the side.
(d) In the back of the class.

8. Before the Garcias went out to dinner with the Fannings, what did the mother tell the girls they were allowed to order as a drink in the restaurant?
(a) Tea.
(b) Milk or ice water.
(c) Coca-Cola.
(d) Liquor.

9. Who taught at the Catholic school that the girls first attended in New York?
(a) Public school teachers.
(b) Their mother.
(c) The Sisters of Charity.
(d) One of their aunts.

10. What did Carla find under the Christmas tree on Christmas morning?
(a) A new book.
(b) A baby doll.
(c) New clothes.
(d) Another mechanical bank.

11. What did the girls think of the nun's habits?
(a) They made them look like dolls in mourning.
(b) That they must be hot.
(c) They were scary.
(d) They were comforting.

12. Why did Sandi get in trouble at the art lesson?
(a) She was late to class.
(b) She was sloppy with her brushes.
(c) She jumped ahead of the instructions given and acted on her own.
(d) She backtalked the teacher.

13. What did the de la Torre family do on Christmas Eve after the art lesson?
(a) They visited New York.
(b) They went to the National Cathedral.
(c) They opened presents at grandmother and grandfather's house.
(d) They swam in the pool.

14. Why did Carla's mother not drive her to school?
(a) She didn't know how to drive.
(b) She was too busy to drive her daughter.
(c) She prefered the bus.
(d) She wanted Carla to walk for the excercise.

15. What was confusing to Carla as she entered the 7th grade?
(a) Her dad dressed weird.
(b) Her mother couldn't drive a car.
(c) Her sisters were embarrassing.
(d) Her body was changing.

1. What did La Bruja do almost daily to annoy the Garcias?

2. What did Yolanda's 4th grade teacher tell the students about what was happening in the world?

3. Where did the Fannings take the Garcias for dinner?

4. When Victor arrived at the Garcia's and the secret police were there, what was revealed about the Garcia's immigration papers?

5. Why did Yolanda like her 4th grade teacher so much?

More summaries and resources for teaching or studying How the Garcia Girls Lost Their Accents.

How the Garcia Girls Lost Their Accents from BookRags. (c)2020 BookRags, Inc. All rights reserved.