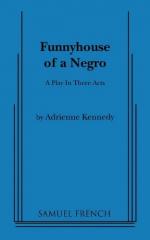 1. Describe the set at the opening of Adrienne Kennedy's play.

The opening scene of Part 1 is set in the the bedroom of a girl named Sarah. Around this room are various other rooms where scenes will take place.

The first time the white woman crosses the stage she mumbles something the audience can not hear. The second time the audiences hears her say that she should never have let a black man touch her.

3. Describe the Duchess and Queen Victoria the first time the audience sees them.

The Duchess and Queen Victoria are in the Queen's bedroom. They both have long curly black hair. They also wear masks or facial makeup.

4. In Part 1, who does the audience learn is knocking?

The audience learns that the constant knocking is from the Duchess' father who died.