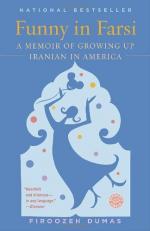 Objects & Places from Funny in Farsi: A Memoir of Growing Up Iranian in America

Firoozeh and her family emigrated from Abadan, Iran, to the United States when she was seven years old.

Kazem moved his family from Iran to Whittier, CA, a suburb of Los Angeles, when he accepted a two-year assignment as a consultant to an American company.

To Kazem, the most magical spot in the world was Disneyland. He considered Walt Disney a genius and the Pirates of the Caribbean ride as the most outstanding invention of mankind.

The family relocated to Newport Beach, CA, for another consulting job that Kazem accepted. Everyone except the gardeners and nannies were blond and beautiful in Newport Beach.

Firoozeh attended college at UC Berkeley, which is where she met her future husband, Francois Dumas, who was also a student there.

After Firoozeh and Francois were first married, they lived on a...