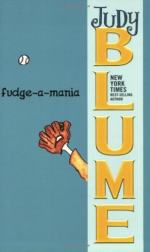 Judy Blume
This set of Lesson Plans consists of approximately 112 pages of tests, essay questions, lessons, and other teaching materials.

Chapter 1: Who's the Lucky Bride?

• Fudge announces that he plans to marry Sheila Tubman.
• Peter pretends to collapse because he despises his neighbor and schoolmate, Sheila.
• Mom tells Peter and Fudge that they are going to vacation at a house in Maine next door to the Tubmans.

• At Tico-Taco, the family talks about the upcoming vacation and Mom suggests that Peter invite a friend along on the vacation.
• Peter calls his friend Jimmy, prevaricating that they probably won't even be able to see Sheila's house to convince him to come on vacation.
• Jimmy calls back to accept the invitation, saying that his father Frank will camp nearby.

Chapter 3: The Most Disgusting of Them All

• The family drives 10 hours to Maine and Mom reads facts from a guidebook.
• When the family arrives at the house, Sheila is frightened by Turtle, but it turns out that...